Due to a lack of a quorum, the next meeting of the CSCA will be held on Saturday November 3rd from 2-4pm at the Meriden Library in the Marion Cook Room, at 105 Miller Street in Meriden, CT

and lecture…all 29 participants had a great time!

Thanks to Glenn Budzinski, event organizer. 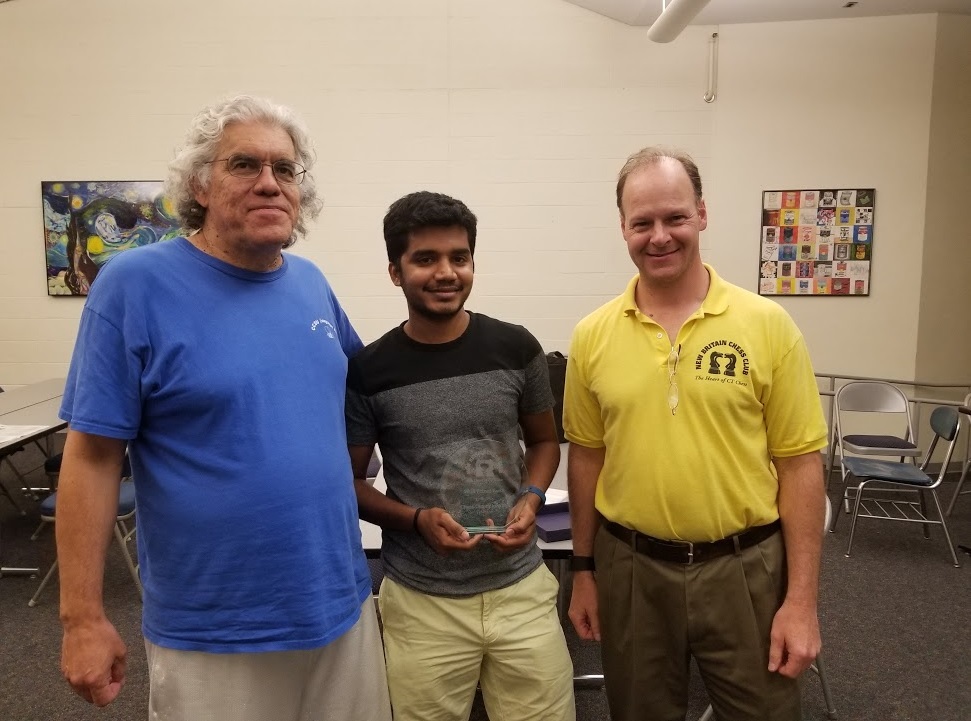 May30
US Champion Simul in Newtown!

Arslan is a USCF certified “Life Master” with a USCF peak rating: 2409.  Currently residing in Connecticut  Mr. Otchiyev is among the Top 1% of competitive players nationally in the U.S.  He was six time national champion of Turkmenistan.

If this year’s GNHFO had anything interesting about it, it was the strong performance of females in the scholastic sections. Sandhya Sudarsanam won the U1000 section with a perfect 5-0 score, Akshita Ashokkumar took 3rd in the U800 section, and Ripley Chance took first place in the Non-rated section, making this year’s tournament the best performance for females in the tournament’s 20 year history!

August 8
Results by CT representatives at the national tournaments for state scholastic champions in Norfolk, VA:

April 30
Finals of the NNGP to determine CT Representatives for nationals were played at University of New Haven.

Here are the final three tables, with 4 players each, for Denker, Barber and Girls nominations:

Mike Lei Wang (Quick 1876), a high school student at The Franklin Academy in East Haddam, CT swept a very strong field at the first ever CSCA CT Rapids State Championships, held in West Haven. He won all 7 games, in the process beating 2 National Masters and a FIDE Master. Congratulations Mike! (for details see the RESULTS section of this site)

Final standings of NNGP are here.

3/9 Match Simsbury High School versus UConn was played in Storrs.

Team Simsbury with the UConn Husky in front of Gampel Pavilion.

Taking first on tie-breaks was Manav Ramprasad with 3.5/4.0 pts, 2nd place was Pranav Jayaganesh. The Class prize winners were:

Above Ted with black during his game in the last round against Gary Shure.

Feb 12th. See the amended flyer in the EVENTS section of this site.